Yesterday, we took the kids to a minor league baseball game. I knew it would be a late evening so I got a little tricky in working naps in. We picked up some pizza and joined Shuky for his lunch hour at work. Then, I drove 40 minutes out to the Plaza District to drive around and enjoy the beautiful scenery. It worked, as soon as I got there, he finally conked out and went to sleep. Bella had fallen asleep within seconds of getting in the car. I drove around a bit more, drooled as I passed the H&M with HUGE sale signs all over the windows, and headed back home slowly. Figured it would be best to be close to home once he woke up, he would probably need the bathroom! He woke up before Bella so we sat in the front of the car, playing games, while she slept for a little while longer. Then we headed upstairs and had a pretty low-key day. When Shuky got home from work, we packed up a cooler and headed out. We met up with some of his intern friends in the parking lot and had a mini tailgating party before heading into the game. Unfortunately, I didn't get any pictures of Benny playing football with all the guys, it was really cute! 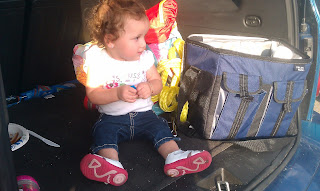 The tickets we had purchased put us on a patch of beautiful grass, on a little hill, directly in the sunlight, far out beyond the outfield. 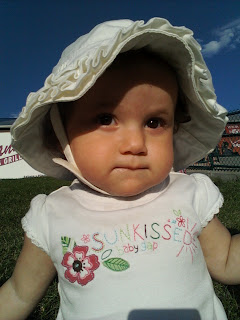 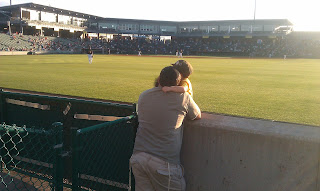 After ten minutes of that, we got up to see what we could do in terms of a better place to watch. 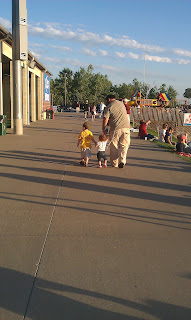 Luckily, we find a seating section between home and first base with a really nice ticket guy working there. It was in the shade, it wasn't too full at all, and he let us sit there happily! We were right by concessions and close enough for Benny to REALLY get into the game!! 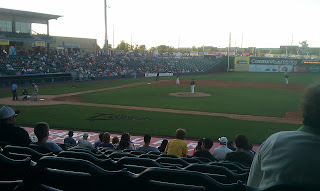 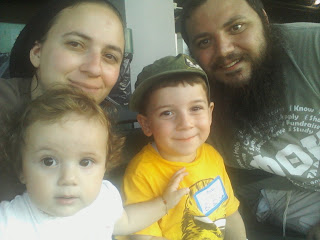 He even got to meet the team mascot, Sizzle. I don't even have the words to describe the sheer joy he was exuding when he came back to his seat after taking this picture!! 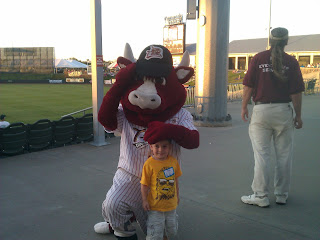 Bella required a little more attention to keep her happy, good thing she has an awesome father!! He took her for walks, hoisted her up on his shoulders during some songs, danced with during others. 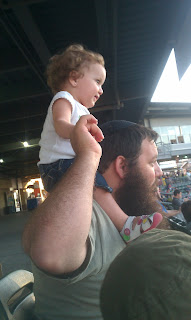 The game ran late. Benny was extremely surprised to still be up when he was able to see stars. That is not a common occurrence for him! A good lesson for him that good behavior is worth it! At one point, he started a little tantrum, all it took was me gathering my stuff and Shuky saying, "We're leaving." I don't think I've ever seen him sit down and be quiet so quickly. Seriously! 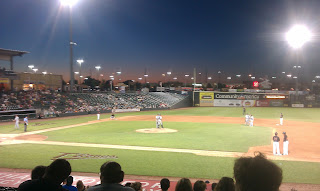 Somehow, both of them made it without any serious meltdowns, the game ended and we headed out to the car. 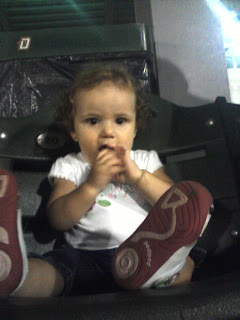 She fell asleep the second the car started. We kept him up by going over the excitement. He went to sleep very nicely when we got home.

Now, the next day, I am paying for it all. Grumpy kids, grumpy me. Too much TV to keep things calm. I need to do grocery shopping but there is nothing short of a million dollar check in my name, and even then you can expect some hesitation, that will get me out into the general public with my kvetchy kids today. I am calling it a pantry-food-creation day! I'll do my shopping later!

Don't get me wrong, it was worth it. Completely. Even the insane amount we spent on cold drinks, way more than what we spent on our grass-hill tickets! Watching Benny yelling encouragement and seeing him understand the team we were rooting for versus the other team. He was our own little sportscaster, announcing the number of the player at bat. Clapping, singing, dancing, pretending to be the team manager and 'calling' his players from his 'headset' to give them pointers. Getting involved with everyone around us and anyone walking past. I was extremely impressed with his understanding and his behavior, despite the late hour and the requests for all the sweets around him being denied.

We will definitely entertain the idea of doing this again!!