The minute I saw the view from the private balcony in our room, I completely forgot about the hellish day I had traveling alone with Benny. So began our amazing Pesach in Aruba!
Benny is even in heaven. He wakes up every morning, remembers where he is and giggles a "HI MOMMY!!!!"
Walking to the pool, there are a few huge bird cages with parrots, macaws, and the likes. They yell out their hellos and such; Benny yells back, "HOLA BIRDIES!" Being the gentleman that he is, he goes to each cage individually to say Hola to each bird! :)
Let's talk views. Standing on our balcony, we have an amazing panoramic view - to the right is the pool and, just beyond that, the gorgeous sea. To the right is the island, with some lakes and forests in between. It's unreal! Benny and I like to sit out there in our PJs in the mornings...
Well, that's all I have time to write for now. Just wanted to say hi and wish everyone a kosher and happy Pesach!
Posted by Chani M at 5:46 PM No comments:

Bring on the Boxes!

Every time I get the laptop, I always come to my blog to see the last time I wrote. Then I pretend I didn't check it and move on to the next site. It's not that I don't love you, dear blog of mine. It's that so much has been going on, I don't know where to start! It's that I need a week just to get all my words in a draft, and then another week to edit it!
It's 12:42 am. Shuky fell asleep while putting Benny to sleep. I've been doing a whole lot of nothing for the past two hours. It's time to face my fears. It's time to write!
Let's start where we last left off. The last real post of substance was back in January, after Shuky's wisdom teeth were removed. I'm going to move in high speed so keep up with me!
Shuky found out that upon completion of this semester, he will more or less have completed all the credits at NICC that will be transferable toward his major. Which means it was time to decide on that transfer school a whole lot sooner than expected! After days and days of talking and debating, we narrowed it down to a few schools. Then began the phone calls.
I should backtrack a few years for a minute. Ever since the concept of college has been a thought in Shuky's mind (we are talking 'Young Shuky' here), Iowa State University in Ames, Iowa (read that Nowheresville, Iowa) has been the main contender. They created the first computer. That pretty much sealed the deal for him.
Getting back to our story, we kept saying a normal Jewish community was necessary , preferably one with a school for Little Monster. After making quite a few calls to the Rabbis in the areas of these Universities, we realized most are not surrounded by family friendly communities.
We also realized that we really needed to stay in Iowa. Out of state tuition is extortion, at the least. And the rules are beyond unbendable, apparently.
This left us with University of Iowa, in Iowa City, and Iowa State University, in Ames. After multiple weekends spent in Des Moines, the closest Jewish community - about a 35 minute drive, and a few trips out to the school itself, Shuky was in love. Iowa State it is.
Then came trying to figure out if we would live in Ames or Des Moines. Unfortunately, Des Moines does not offer a school option for Benny. Also, rental options were very slim, if any. For some reason, banks want you to actually have money to buy houses these days. Weird!
Which means -- you got it -- we're moving to Ames! We found a really cute apartment on one of our many trips out there, put down a deposit, and our lease officially begins August 1st.
Shuky is super excited and Benny has been sporting some Cyclone love, getting ready for the games we will be rooting at!!!! 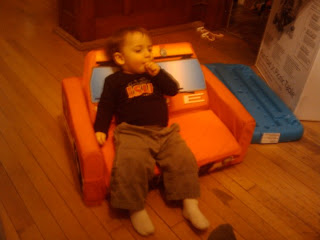