Our Own Rock Star

I'm officially working full time. While I started the job right before all the holidays, I started with the request for slightly less hours. I knew I wouldn't be able to be functioning at 6:30 a.m. and still make it through the holidays! Now, I'm here at 6:30 each morning and can hear Shuky and the kids enjoying their mornings together. To help things go more smoothly, at night I'm making lunches and setting out breakfast. Before I collapse into bed, there are bowls, spoons, cups, napkins, a small bottle of water near each place, and big cereal containers sitting on the table. The kids just have to pour the cereal of their choice into their bowls, get the milk from the fridge, and pour it nicely. So far so good. No big spills. No big fights. They love the feeling of being big enough to handle these daunting tasks! It gives Shuky a little extra time to get ready for his day while I plug away downstairs. 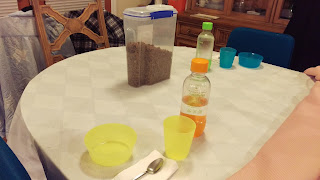 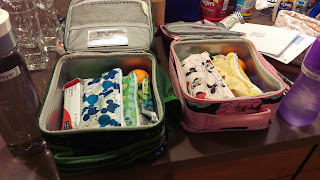 We've also started a little carpool, so a few days a week they get picked up and a few days a week we bring friends home from school. It's been working out very nicely and the kids love getting the chance to ride to school with friends!!

So this past weekend, a friend of ours got married in New York and Shuky surprised him by coming in for the wedding.

Which, through process of elimination, meant I was home with the kids. Which also means that whatever can go wrong, most definitely will.

For the last few weeks, since Shabbos has been starting earlier, Shuky has been taking the car on Fridays and just picking the kids up on his way home from work. Every Friday afternoon, the elementary school (K-8) has an assembly where they talk about the week, sing some Shabbos songs, announce the Project SHAlom winners (something akin to child of the week) and just an all around festive twenty minutes that Benny absolutely loves! Well, Shuky has been trying to get to school a couple minutes early so he could grab Bella and take her to the assembly to enjoy it as well. So, I thought I'd try doing the same thing for her!

As I walk into her classroom, I find out I've just missed her and she's in the office getting checked out because, what do you know, she's swallowed a rock somehow on the playground. She's crying hysterically. No problems breathing, no vomiting, just scratched her throat. I helped her calm down and tried to get an understanding of how my 4.5 year old, a fairly mature 4.5 year old at that, came to have a rock ingested. If I pieced the story together properly, it seems she had the rock up against her lips (sensory thing I guess) and when a loud announcement came over the PA system, asking the Project SHAlom winners to 'come on down', she got shocked and inhaled too quickly. And swallowed the rock. No one was 100% certain about the size of the rock but there were some guesses.

I have a sibling that swallowed something as an infant and there's a whole crazy story that goes along with it. This is not something we take chances with. We (myself and a crying Bella) pulled Benny out of the assembly and went straight to the ER.

They didn't hear anything obstructive in her breathing, her lungs sounded fine. An X-Ray was ordered..

They took a chest X-Ray and there was a little fluffy spot in her lungs. The radiologist was honest, he said it was more than likely just a vessel but without knowing where the rock was, he wanted more info. Leave no stone unturned, if you will. See what I did there? Gotta find the humor in these situations!

Anyway, they took a stomach X-Ray and there, in her tiny little intestines, sat the rock. Waiting for it's turn down the poop chute. 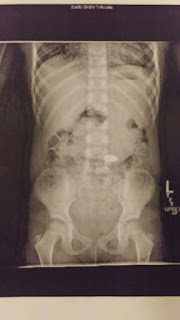 Which was a huge relief because, had it not shown up, the radiologist was going to push her through to the ENT department to start digging around.

On a side note, I feel like Benny deserves his degree for completing medical school based on the amount of questions he asked during those couple hours. Which, at the moment, is a cute part of the story. During our hospital time, it was a little less cute.

The Perks of Being a Geeky Kid in Seattle

Just to clarify, I find there to be a huge difference between being dorky and being geeky. On dictionary.com, they agree with me! 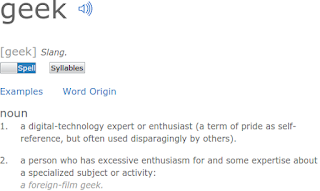 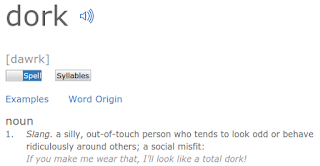 Benny could be considered geeky. Braniac for sure. Oodles of knowledge, a great desire to share it with everyone. At all times. Yes, that's Benny. He definitely has 'excessive enthusiasm' for all things in life!

A friend sent us an email in the end of August, he knows some of the big guys at Geekwire and he saw that they were looking for geeky kids to interview for their big conference. He felt that Benny would be a perfect fit. We agreed and were more than happy to be introduced!

I sent them this video that Benny asked me to record during our summer visit to California:


They sent me back a time and place to bring him in.

He really enjoyed being interviewed and we've been patiently waiting for the videos to be posted to see if Benny made the cut. When Benny found out that he was used in the videos, he immediately turned to Bella and excitedly announced, "Bella!!!! I'm on the INTERNET!!!!!"

They've started posting videos so I wanted to share the links. I love his responses, they are so him. (He answers a question in each of these videos.)

If more videos surface, I will try to share them!!

Posted by Chani Meyer at 1:37 AM No comments: