Videos Worth Blogging About

The Monsey Goldsmith Clan put up some hilarious and adorable videos yesterday and they deserve to be mentioned!!! These kids are seriously something else! You've got to hear Shaina and Zalmy discussing things, like toy cars and instruments!!
Enjoy! Leave comments for them so they will keep putting up pictures!!!
http://www.youtube.com/user/crazyemt247#play/uploads
Posted by Chani M at 8:07 AM 1 comment:

I have been talking about doing this for a while now, as some of you may know. Gap is doing a casting call for models and I am entering Benny. Anything that comes out of it goes into an account for him, hopefully to start his college fund! Right now, I can put up to five pictures on the site and you can vote for each one or choose one specific one you like, but you can vote once a day (for one picture only) until sometime in November. Although there will be a panel of judges to determine finalists, the more popular pictures have shots at other things as well.
PLEASE VOTE FOR BENNY EVERY DAY!!!!!!!
http://family.go.com/gapcastingcall/entries/chananzo/355851770/
Right now there is only one picture you can vote on (not the best one either), soon the second will go up and eventually I will have a total of 5...
Thank you so much!!!!!!!
Feel free to show this to anyone you want!!!
Posted by Chani M at 7:52 AM 4 comments:

Rosh Hashana was really nice. We had ate three out of the four meals out at friends' houses. Benny was mostly OK. For some reason, he had the hardest time with the Shabbos day meal (when he walked to someone's house!!!) but I'll give him that one. Chalk it up to crazy schedules, intense meals, new faces, you can choose! He loved being in shul on Sunday. I let him walk most of the way to see if he could make it on a Shabbos, but I thought I would be late and miss the shofar so I threw him in the stroller and make a run for it. Of course, the shul was running late so I had another 20-30 minutes to spare! Next time...
Benny sat with Shuky for a nice amount of the davening. When it came to singing parts, he got SO excited and started doing his regular dancing and rocking to the beat. People from the bimah were dancing with him. Everywhere Shuky looked, someone else was either enjoying the show or joining in. So cute!!
School has been going well for me, thank G-d. My older class has been giving me great reviews (via parental feedback) and my younger class is giving me a run for my money. I have them for the last hour of the day and I usually don't get my full hour. By the time I get into the room, they are very ready for the day to be over and nothing I do can keep them happy. It's only been a week so I still have a few tricks up my sleeve. I'm hoping that once the Yomim Tovim are over and the school schedule gets back to normal, I will really be able to make something more of that period!!
Benny is doing well in school, as well! If he doesn't have a good nap before school, he is a MONSTER! But when he does sleep, he loves being in the class! He has his friends already (hung out with them at shul too :D) and does not let me touch his lunch box. He has to carry it everywhere! Of course, it is half his size and drags on the floor but it's his and I better not touch it!
Shuky is also doing well in school! NICC just announced that they have paired up with University of Iowa and are offering a BA in Shuky's program. That means that our two years here may have just become four, but we will have to see as time goes by...
And, I have offiically stopped nursing. Did it for 14 months, super proud of myself. BRING ON THE BOOZE!
Hope everyone had a beautiful Chag and an easy fast today. May you all have a sweet new year with health, wealth, and happiness. And all that good stuff.
And, HAPPY BIRTHDAY MIMI!!!!!!!!!!!! WE LOVE YOU!!!!!
Posted by Chani M at 8:18 AM No comments:

So, lately Benny has been showing signs that he's ready for a potty. Yes, he's really young (not quite 14 months), but developementaly, he has been a bit advanced and this didn't surprise me too much. So, while shopping for his 'school supplies' today, I decided to buy him a potty. I took him into the bathroom, sat him down, and I sat on the toilet across from him and he did it! He peed! He got super excited and started pointing down, like he does with a dirty diaper. Of course, this got me super excited so I started clapping and singing for him and he just went wild, clapping and laughing and singing along with me. Too bad Shuky borrowed my phone's SD card. No pictures or videos for anyone. We'll pretend the next time is the first!
Speaking of school (I think I mentioned it up there...), I've been at the school a lot this week, getting my classroom ready, gathering text-books, scoring all the cool supplies, etc. so Benny has been in daycare. The first day I was ready for the waterworks and him grabbing my leg and never letting go. We opened the door, he ran in for the toys and never looked back! I came back four and a half hours later, expecting to see a basket-case (him AND the teacher!). But, no. Granted, he was super happy to see me. Ran over and gave me a big hug! And then went back to the toys and his teacher. I gathered his things and said, "Ok Benny, let's go home, say goodbye!" He turns to me, waves and says, "Bye Mommy!!" and turns around and continues playing! I literally had to drag him out of there! Taking him back today was just as great, I opened the door to his room and as soon as he realized where he was, he was OFF! The teacher had to wrestle his back-pack off of him! :) 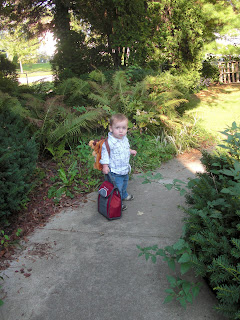 Tonight I was in school for a while, had Benny with me. He found a pencil (unsharpened) and was holding it. He fell down and it hit him right below his eye...nice bruise and cut! I, of course, starting freaking out! This was, after all, the first big booboo in all of 13.5 months!!! A few hugs later (for both of us) and he was all better...
And now, my friends, I must sleep.
But before I go, just a quick mention of a great fundraiser going on to raise awareness for Ovarian Cancer... http://www.kelly-confidential.com/send_virtual_tshirt.html You design adorable shirts and send them out to friends and for every time you do it, a dollar gets donated to OCRF and you get entered to win a new Electrolux Luxury Washer/Dryer combo! Go. Do. Win!!
Good night to one and all!
Posted by Chani M at 10:39 PM No comments:

Benny is hillarious. My mom bought him a nice lunch box for school and this morning I pulled out his backpack to make sure it would work for him - he has not let go of either since. When we had to go out running errands, I literally had to pry them away!!! He has been wearing the backpack, while loading and unloading everything (including my cell phone) into the lunch box! So cute!!
The way he's been spouting his gibberish lately, I feel like he's just going to start talking in full sentences all of a sudden! And of course, it is all accompanied with wild gesturing and pointing!
FYI, for anyone who has a need for baby products, a great site to keep an eye on is
MamaBargains. They have awesome deals!!!